Why Aren’t My Solar Panels Producing 100%?

Scientists and many people worldwide know the 100% undebatable fact that nothing performs at 100% efficiency. But why solar panel production is not 100%?

In physics, this is known as The Second Law of Thermodynamics, or “You Can’t Break Even.” Solar energy is no different.

This is a topic that may be confusing for some people. It is only for the brave, tech-savvy few who want to explore an advanced explanation of solar modules and inverter ratings.

There’s quite a bit of scientific and industry jargon to go through. Stick with us, and we will simplify it for you. If you get through to the end, you’ll feel more confident comparing and accurately predicting solar energy output for different solar products.

Ultimately, this will give you a deeper understanding of solar panel power ratings and what they mean for your savings when shopping for different solar companies.

Your solar salesperson or designer needs to understand these things when getting solar quotes. If they do not correctly calculate your energy usage and the cost from the annual electric utility, none of these calculations will be accurate enough to offset your current electric usage and bill – to be net-zero.

At Option One Solar, we not only calculate everything below, but we also measure your electricity usage by the amount you consume and what time you use it. Using this data, we can ensure the system will cover your electricity costs through different rate charges that will change depending on the time of day, referred to as TOU (Time Of Use). 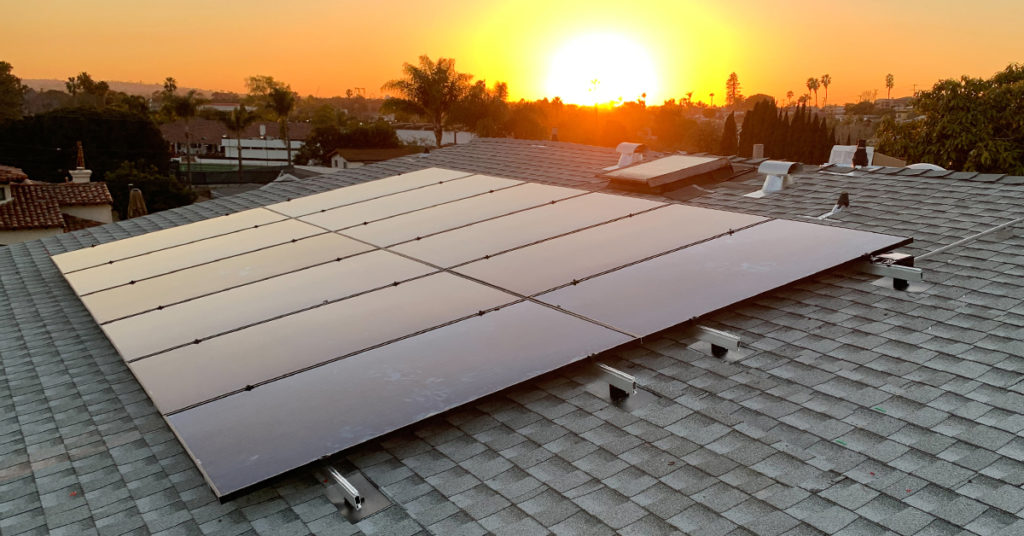 What Is A Solar Panel Power Rating?

Solar PV (photovoltaic) panels are classified by the amount of power they produce under specific conditions, which becomes their “rating”. The most common ratings used in the solar industry are:

This is the standard published PV power rating you will see from most solar companies. The power is rated under the Standard Test Conditions (STC).

To get the “Peak” rating for your entire solar power system, you’ll need to add up the rated power for each panel in your system.

You don’t need to know the math behind this rating, but knowing what they are measuring is helpful. Remember that peak ratings are measured in Direct Current (DC).

The STC rating is always the highest because it is based on how the solar panel performs in optimal conditions. The ideal environment rarely exists in real life.

The reality is that your solar panels will generate different amounts of energy throughout the year. That’s why the other ratings were created – to provide a more accurate projection of how much usable power you’ll get.

The “P” in PTC stands for PVUSA. PVUSA itself is an acronym for Photovoltaics for Utility-Scale Applications. The PVUSA testing center in Davis, CA, developed this rating system for solar panel performance in the 1990s.

The PTC rating represents more realistic testing conditions based on the following metrics:

You may notice some similarities with the previous rating. However, the operating temperature is much more realistic at around 104° F. Solar cells typically operate around 36° F hotter than ambient outside air.

While this rating is more accurate, it is also referred to as the PTC-DC because the panels are rated in terms of Direct Current or DC.

This means that it doesn’t take the inverter inefficiencies into account. The PTC-DC ratings are published by the California Energy Commission (CEC).

Solar panels generate DC electricity, but your home uses AC. The energy your panels produce must be converted into the correct type of electricity.

This is done with another piece of equipment called an inverter. This is referred to as DC to AC conversion loss and is typically in the 4% range.

This power rating uses the PTC rating we just talked about but also took the number of panels and the inverter into account when calculating the actual power output. The CEC-AC rating is closer to the real-world energy production you will see for your home.

Here is the basic equation:

The AC system rating is based on actual simulations in real-world conditions. This is the rating that will be the most accurate for what you will experience. This rating tries to account for all possible losses and inefficiencies that can reduce the solar power output.

In addition to the inverter, the AC system rating includes negative effects from shade, dirt, wiring, connections, and transformer energy losses. It usually works out to around 75% of the peak power, based on the original STC Rating.

Your solar system should produce power at the AC System Rating on most days.

Peak Sun Hours is one of the most significant factors impacting solar panel performance. While the sun is shining throughout the day, you may think that you’ll get 10-12 hours of solid daylight, but only bout 50% of this is useable for solar. The term ‘Peak Sun Hours’ is actually used to describe hours when the intensity of the sunlight is at its highest – the brightest part of the day. As you can see above, solar system homeowners in California experience around 5-6 Peak Sun hours daily. That is the highest in the entire country! Typically, a Peak Sun Hour is defined as an hour when the intensity of the sunlight reaches 1,000 watts per square meter (which is one of the optimal conditions on which these solar ratings are based).

Option One Solar’s proprietary software takes 16 points of reference for other factors that can affect the solar panel performance at your home, including:

Azimuth & Tilt refers to the direction and positioning of the solar PV systems. In general, due South will perform the best, but anything East to West will produce electricity well. Facing the panels, North will significantly reduce solar energy production.

The overall efficiency of the solar power system will also impact the solar panel power output. This is why it is so essential to match your solar panels with the capable inverter. It is especially important when including energy storage/batteries.

Option One Solar systems are expertly designed to ensure everything works together as efficiently as possible to prevent unnecessary loss of power through the system itself.

Nothing operates at 100%. Solar panel power ratings are determined by their output in optimal testing conditions. Solar panels typically operate at around 80% of their power rating. This is because small bits of energy are lost in normal operation.

While AC ratings are the most accurate, they are not a straightforward calculation. It will be much easier to get the STC ratings for comparison. What’s important is that you’re making an apples-to-apples comparison using the same ratings across the board.

Option One Solar uses the latest cutting-edge technology in our proprietary solar design software. Our platform considers all of the above factors, direction/azimuth, degrees of tilt, and historical data from NASA, NREL, National Weather Stations, Satellites, and many others.

We can produce the most accurate projections for average system performance over time.

Option One Solar power systems are designed to produce what your home needs at the time of analysis, plus any additional power requirements based on any home additions you have planned for the future.

We set conservative default calculations so that our systems will actually overproduce to account for years with more than average acclimate weather.

Our proprietary design software gives us the most accurate data so that we can install a solar power system that is sized to generate more electricity than you need, which also gives you extra energy if and when it is needed.

Call Option One Solar To Get Your Free Assessment