There are many solar energy myths for homeowners. Solar is a fast-growing and emerging industry that is still experiencing revolutionary changes every day. The success of solar has caused opponents to create widely circulated solar energy myths that are either outdated or entirely false. We want to debunk those misconceptions and show you why solar is the best solution for your energy problems.

This is one of the big points always thrown out by opponents. The fact is, that clouds will impact solar panel energy production. However, it is a complete solar myth that they will stop working altogether. The clouds would have to block out enough sunlight so that it would be pitch dark, which just doesn’t happen even on the most overcast of days. Solar panels continue to generate energy when it’s cloudy.

Some of the world’s cloudiest places, like the UK & Germany, are among the world leaders in solar generation. They do it with fewer solar hours in the day than California receives (almost three to four fewer hours per day). That is because clouds don’t block sunlight they diffuse it.

Solar panels’ efficiency remains the same, but the output generated may be reduced from 60% up to 80% depending on cloud cover. Solar radiation and photons, which are what solar panels need, are still making their way down to the Earth’s surface. When your solar system is designed, that annual output number considers how many cloudy days your area receives on average. Despite any clouds or intermittency, your system will produce what you were promised by the end of the year while supplying your needs every day.

Myth 2: “Solar panel systems will never pay for themselves.”

For this solar energy myth, we’ll let math and experience speak for themselves. If you ask any solar system owner, they will tell you firsthand about the fast paybacks. Switching to solar makes most people more aware of their home’s energy consumption, so they alter their behavior to decrease their peak-time demand. It becomes a lifestyle. This is not necessary, although it is recommended, and will reduce the time it takes for your system to pay for itself.

Let’s talk about the averages, and remember Californians are on the better side of the spectrum due to their location. The usual payback period for most American homeowners is anywhere between 4-6 years. Businesses can see a faster payback period, approximately 3 years. Keep in mind that a solar system’s lifespan is generally 20+ years, so that gives homeowners at least 14 years, usually more than 20 years, of free energy and extra money in their pocket. Additionally, we offer a 25-year warranty on their solar energy systems so you’re guaranteed to get the quickest payback period in the market!

Why Aren’t My Solar Panels Producing 100%?

Utility Rates Are On The Rise! 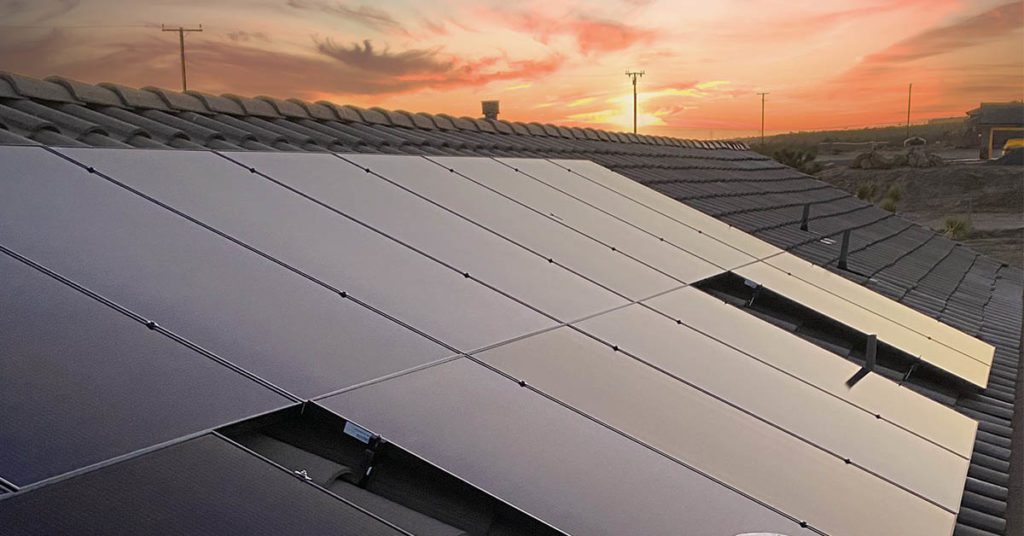 Nothing could be farther from the truth. Any points of roof penetration are sealed with “flashing” to prevent any water infiltration. The solar panels themselves act as a second layer that protects your original roof. Standard solar regulations require these practices. Even in areas prone to hurricanes, laws dictate that installs must withstand at least 135mph wind speeds using special racking equipment.

Besides protecting your roof, panels shade it, decreasing the heat that can get into your attic. Solar panels absorb the sun’s heat and reduce the load for your A/C unit. These solar modules are also easy to remove for any roof repair that you made need due to unforeseen circumstances, such as a branch falling or debris from high winds.

Myth 4: “Solar installs are intense and require a lot of maintenance.”

Solar energy installations are straightforward and do not require any complex processes. The solar installation is so simple that some people prefer to make them a DIY project.

However, we don’t recommend self-installed solar projects because of the hassle of permitting, inspections, and especially the danger of electrocution or falling off the roof. Still, even with that in mind, solar technology is relatively simplistic. The most elaborate feature is doing the math to estimate your home’s energy load, which only happens once during the planning phase.

Whether grid-tied or stand-alone, solar systems are easy to maintain and usually have services provided by installers to do annual checkups as a part of your agreement. Stand-alone may have some extra cleaning involved, but for most owners, the only thing they may need to do is hose off the panels every once and a while to remove dust. That’s it! Solar panels are very reliable and durable to withstand harsh weather, including hail, high winds, and sand storms. In reality, they are a “set it and forget it” kind of thing.

Myth 5: “Solar panels are harmful to the environment.”

This claim was created by big oil companies to stop the public from adopting renewable energy. They try to say that the solar panel manufacturing process is energy-intensive, has toxic byproducts, and rapidly depletes the world’s silicon supply. Older solar technology, like the obsolete thin-film or ‘amorphous’ solar panels, used gases in them that were toxic. These panels have been outdated for many years and are almost never used since the vast advancements in the more efficient silicon crystalline solar cells we use now. So, no toxins leak out of solar systems and create pollution.

The only thing that could be considered toxic in a modern solar energy system is the solder’s lead content, which is currently being phased out. Most panels haven’t hit their 25-year lifespan yet, but that hasn’t stopped the industry from creating solar panel recycling companies prepared to handle the upcoming solar recycling demand. Manufacturers are continually developing more sustainable products that have longer lifespans.

Let’s not forget the main reason why people use solar energy. These small byproducts in solar manufacturing and recycling are a drop in the bucket compared to fossil fuel by-products and pollution. The National Renewable Energy Laboratory (NREL) of the United States Department of Energy conducted research and reported that the average household can reduce their harmful output of toxins by more than half a ton of SO2, one-third of a ton of NOx, and 100 tons of CO2 over a solar energy system’s 20-year lifespan.

Solar panels actually increase home values. Zillow found that homes with solar energy systems see a 4.1% higher sales value than traditional homes. Another study conducted by the U.S. Department of Energy’s Lawrence Berkeley Laboratory found that homes with solar PV systems had a $15,000 higher value than similar homes without solar. In truth, the value that solar energy systems add to your home could pay for the system itself.

The more solar energy owners we have, the more peak demand will be reduced on the electrical grid. More people generating solar energy actually “destress” the entire national grid. The energy problems Texas experienced in 2021 were actually helped by solar users providing what little energy they could to that grid when fossil fuels had failed.

Solar can be an energy buffer for population and municipal growth, helping energy demand with the influx of new residents. Solar power can diminish the need for utility companies to install larger transmission lines, install upgrades to their grid, and grow their capacity.

Some companies have the archaic mindset to increase their capacity with fossil fuels to match solar generation, which is absolute nonsense. They manage all the extra energy obtained from solar systems on their network. They get to harness and resell solar energy to their customers at increased prices. The biggest challenge these for-profit utility companies face now is how to keep making money as more homeowners find out that solar energy is much cheaper. Electrical utilities will keep raising rates regardless of solar energy owners.

Myth 8: “Solar is unreliable due to its intermittency issues.”

This is another solar panel myth devised by the fossil fuel industry. Yes, there is some intermittency with solar systems. Solar panels cannot generate energy at night when the sun is not shining. Still, all the energy generated throughout the year can support any night hours or cloudy days. If power companies install their own solar arrays to use, they have to make sure it doesn’t hinder their distribution. However, they currently have enough to handle all current loads with fossil fuels. Therefore, solar-generated energy is just extra icing on the cake.

There are several ways for homeowners to offset low-producing days or continue to use solar-generated power at night. You can convert your system to a stand-alone or “off-grid” system. With this setup, you may have some switches to throw from time to time, but you can make it where you have the backup you need from the grid while using solar during the day.

Utility-scale solar can use CSP systems that will generate and store solar energy for when it is needed. These low-energy times are easily planned for, making them both moot points.

Solar energy myths cannot hide the facts anymore nor stop millions of people from saving money and enjoying solar benefits. You can start your solar power adventure with expert service and installation from Option One Solar.